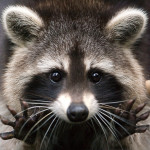 The raccoon, sometimes spelled racoon, also known as the common raccoon, North American raccoon, northern raccoon and colloquially as coon, is a medium-sized mammal native to North America. The raccoon is the largest of the procyonid family, having a body length of 40 to 70 cm (16 to 28 in) and a body weight of 3.5 to 9 kg (8 to 20 lb). Its grayish coat mostly consists of dense underfur which insulates against cold weather. Two of the raccoon’s most distinctive features are its extremely dexterous front paws and its facial mask, which are themes in the mythology of several Native American ethnic groups. Raccoons are noted for their intelligence, with studies showing that they are able to remember the solution to tasks for up to three years. The diet of the omnivorous raccoon, which is usually nocturnal, consists of about 40% invertebrates, 33% plant foods, and 27% vertebrates. 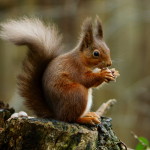 Squirrels are members of the family Sciuridae, consisting of small or medium-size rodents. The family includes tree squirrels, ground squirrels, chipmunks, marmots (including woodchucks), flying squirrels, and prairie dogs. Squirrels are indigenous to the Americas, Eurasia, and Africa, and have been introduced to Australia. The earliest known squirrels date from the Eocene and are most closely related to the mountain beaver and to the dormouse among living rodent families. Squirrels are generally small animals, ranging in size from the African pygmy squirrel at 7–10 cm (2.8–3.9 in) in length and just 10 g (0.35 oz) in weight, to the Alpine marmot, which is 53–73 cm (21–29 in) long and weighs from 5 to 8 kg (11 to 18 lb). Squirrels typically have slender bodies with bushy tails and large eyes. In general, their fur is soft and silky, although much thicker in some species than others. The color of squirrels is highly variable between—and often even within—species. 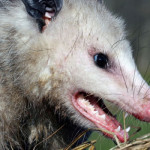 The opossums, also known by their scientific name Didelphimorphia /daɪˌdɛlfɨˈmɔrfiə/), make up the largest order of marsupials in the Western Hemisphere, including 103 or more species in 19 genera. Of South American ancestry, they entered North America following the connection of the two continents. Their unspecialized biology, flexible diet, and reproductive habits make them successful colonizers and survivors in diverse locations and conditions. The word “opossum” is borrowed from the Virginia Algonquian (Powhatan) language, and was first recorded between 1607 and 1611 by the Jamestown colonists John Smith (as “opassom”) and William Strachey (as “aposoum”). The word ultimately derives from the Proto-Algonquian word *wa˙p- aʔθemw, meaning “white dog” or “white beast/animal”. They are also commonly called possums, particularly in the Southern United States. However, the term “possum” was borrowed into use to describe distantly related Australian marsupials (specifically those of the suborder Phalangeriformes) when Australia became known to Europeans, and is more commonly used for this purpose. 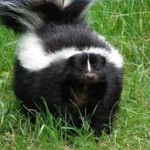 Skunks are mammals known for their ability to spray a liquid with a strong odor. Different species of skunk vary in appearance from black-and-white to brown or cream colored, but all have warning coloration. Skunk species vary in size from about 15.6 to 37 in (40 to 94 cm) long and in weight from about 1.1 lb (0.50 kg) (spotted skunks) to 18 lb (8.2 kg) (hog-nosed skunks). They have moderately elongated bodies with relatively short, well-muscled legs and long front claws for digging. Although the most common fur color is black and white, some skunks are brown or grey and a few are cream-colored. All skunks are striped, even from birth. They may have a single thick stripe across back and tail, two thinner stripes, or a series of white spots and broken stripes (in the case of the spotted skunk). Some also have stripes on their legs. 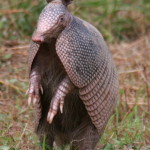 Armadillos are New World placental mammals with a leathery armour shell. Dasypodidae is the only surviving family in the order Cingulata, part of the superorder Xenarthra, along with the anteaters and sloths. The word armadillo means “little armoured one” in Spanish. The Aztecs called them āyōtōchtli , Nahuatl for “turtle-rabbit” and tōchtli. About 10 extant genera and 20 extant species of armadillo have been described, some of which are distinguished by the number of bands on their armour. Their average length is about 75 cm (30 in), including tail. The giant armadillo grows up to 150 cm (59 in) and weighs up to 54 kg (119 lb), while the pink fairy armadillo is a diminutive species, with an overall length of 13 to 15 cm (5 to 6 in). All species are native to the Americas, where they inhabit a variety of environments. 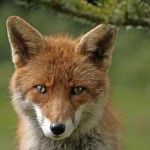 Foxes are small-to-medium-sized, omnivorous mammals belonging to several genera of the Canidae family. Foxes are slightly smaller than a medium-size domestic dog, with a flattened skull, upright triangular ears, a pointed, slightly upturned snout, and a long bushy tail (or brush). Twelve species belong to the monophyletic group of Vulpes genus of “true foxes”. Approximately another 25 current or extinct species are always or sometimes called foxes; these foxes are either part of the paraphyletic group of the South American foxes, or of the outlying group, which consists of bat-eared fox, gray fox, and island fox. Foxes are found on every continent except Antarctica. By far the most common and widespread species of fox is the red fox (Vulpes vulpes) with about 47 recognized sub-species. The global distribution of foxes, together with their widespread reputation for cunning, has contributed to their prominence in popular culture and folklore in many societies around the world. The hunting of foxes with packs of hounds, long an established pursuit in Europe, especially in the British Isles, was exported by European settlers to various parts of the New World. 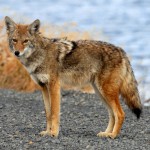 The coyote (US /kaɪˈoʊtiː/ or /ˈkaɪ.oʊt/, UK /kɔɪˈjoʊteɪ/, or /kɔɪˈjoʊt/;[a] Canis latrans) is a canid native to North America. It is a smaller, more basal animal than its close relative, the gray wolf, being roughly the North American equivalent to the Old World golden jackal, though it is larger and more predatory in nature. It is listed as “least concern” by the IUCN, on account of its wide distribution and abundance throughout North America, even southwards through Mexico and Central America. It is a highly versatile species, whose range has expanded amidst human environmental modification. This expansion is ongoing, and it may one day reach South America, as shown by the animal’s presence beyond the Panama Canal in 2013. As of 2005, 19 subspecies are recognized. 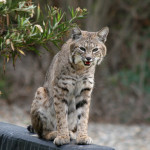 The bobcat (Lynx rufus) is a North American mammal of the cat family Felidae, appearing during the Irvingtonian stage of around 1.8 million years ago (AEO). Containing 12 recognized subspecies, it ranges from southern Canada to northern Mexico, including most of the continental United States. The bobcat is an adaptable predator that inhabits wooded areas, as well as semidesert, urban edge, forest edges, and swampland environments. It remains in some of its original range, but local populations are vulnerable to extirpation by coyotes and domestic animals. The bobcat is vital for controlling pest populations. With a gray to brown coat, whiskered face, and black-tufted ears, the bobcat resembles the other species of the mid-sized Lynx genus. It is smaller on average than the Canada lynx, with which it shares parts of its range, but is about twice as large as the domestic cat. It has distinctive black bars on its forelegs and a black-tipped, stubby tail, from which it derives its name.

Every situation is unique, we try to relocate all animals except in cases where the animal is very sick or aggressive. Releasing such animals can cause a much larger problem.

These are animals that we do remove but is deemed illegal by FWC and can NOT be released once trapped by law.